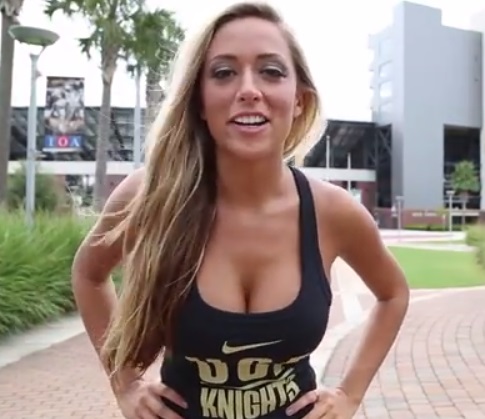 While the NFL scouts are heading to the Fiesta Bowl to watch Blake Bortles, the eyes of everyone else will be on Lindsey Duke, who is the girlfriend of the Central Florida quarterback.

Duke, a UCF student set to graduate this year, first hit the big time when she posed for aXis Magazine in August.

Duke and Bortles have dated since high school. They went to prom together, and then college at UCF. Lest you think Duke is some sort of golddigger, she remained with Bortles during his redshirt freshman year and has been with him throughout his time before he became well known.

What’s funny is that much like AJ McCarron and Katherine Webb, the girlfriend has become more famous than the athlete.

“She’s way more famous than I am,” Bortles admitted to the media this week prior to his bowl game.

ESPN even did a segment on Lindsey Duke and Bortles laughed about how famous his girlfriend is (if you look carefully, you’ll see my mug on the screen!):

“Apparently she is more of a household name than I am. She’s more famous than me and there is nothing I can do about that,” Bortles says in the ESPN feature. Bortles has been with Duke even throughout changing hair colors. Two years ago, Duke was a brunette: She looks great either way, but we prefer her as a blonde. The only question is wills he begin to receive modeling and TV offers like Katherine Webb after being shown all over national TV during the bowl game? If you ask us, she sure deserves it.