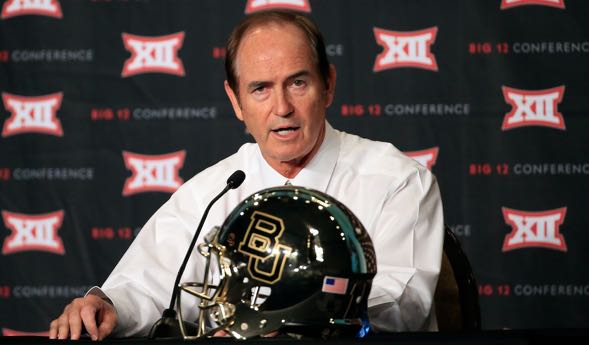 The College Football Playoff committee released its first set of rankings this week, and we are already hearing plenty of grumbling and groaning from fans of the Big 12. If the playoffs started today, we would have Clemson, LSU, Ohio State and Oklahoma playing for a national championship. Baylor is the closest Big 12 team at No. 6, with TCU two spots behind the Bears at No. 8.

According to Las Vegas oddsmakers, TCU and Heisman Trophy candidate Trevone Boykin are the most underrated team in the first CFB Playoff poll. R.J. Bell of Pregame.com says TCU would be a Vegas favorite over both No. 1 Clemson and No. 2 LSU if the Horned Frogs played either team right now. At the risk of irritating Big 12 fans even further, we should note that Baylor would currently be favored over Clemson as well.

On the flip side, the oddsmakers feel that No. 5 Notre Dame is the most overrated team, as Vegas only has the Irish ranked 12th.

What does all of this mean? At the moment, not a whole lot. The top 4 is guaranteed to change over the next several weeks. Ohio State still has to face Michigan State, which is currently No. 7 in the playoff rankings. LSU and Alabama square off Saturday night. The loser of that game will probably be immediately bumped out of the top 4.

As for the Big 12, the worst thing the best teams in the conference could do is beat up on each other over the next month. Baylor, TCU, Oklahoma State and Oklahoma are currently No.’s 6, 8, 14 and 15 in the CFB Playoff rankings, respectively. All of those teams have yet to face one another. If one of the three Big 12 teams without a loss — Baylor, TCU, Oklahoma State — runs the table, they should have a spot in the CFB Playoff. And you can bet the Big 12 commissioner will handle things differently this year than he did last.

There’s no need for Big 12 fans to panic at the moment. Ohio State, the eventual national champion, debuted at No. 16 in the first CFB Playoff poll last year. Things are going to change, but the Big 12 could shoot itself in the foot again if one team doesn’t dominate the rest down the stretch. We already had a team in the CFB Playoff last year that Las Vegas didn’t agree with. Don’t be surprised if it happens again.