Lonzo Ball is no longer part of Big Baller Brand and has joined Nike. He now seems to feel some freedom to speak honestly about the products he and his father LaVar were offering, including their high-priced shoes that sold for nearly $500.

Ball, who was traded by the Los Angeles Lakers to the New Orleans Pelicans over the summer, joined teammate Josh Hart’s “LightHarted Podcast” for an interview. The two talked about Ball’s ZO2 Prime shoes.

“No one knows the real story about those shoes. They were not ready,” Ball admitted to Hart.

Ball said the shoes were so problematic that he switched pairs several times a game.

“I can get a quarter in, but that’s it. We got to switch them every quarter,” Ball said. “If you had my shoes from those games, they exploded bro.”

The shoes were so problematic that BBB switched to selling ZO2 Prime Remix shoes instead. Lonzo even seemed to suggest that his play suffered from wearing the original sneakers.

Lonzo, now 21, has finally branched apart from his father and Big Baller Brand. Lonzo sued one of the company’s co-founders, covered up his BBB tattoo, and left for Nike. He is putting that chapter of his life behind him.

Below is the interview clip from Ball:

Ever wonder why @ZO2_ switched up his shoes every game during summer league rookie year? LightHarted gives you the exclusive look. Presented by @venmo

ESPN/Nice Kicks sneaker reporter Nick DePaula shared on Twitter Monday that Anta is collaborating with the East Bay Times on the Anta KT4s, a special edition shoe that features newspaper clippings on it. The shoe references Thompson’s habit of reading the newspaper at his locker before games.

Klay Thompson is celebrating his new @Warriors Max deal with a special edition sneaker drop this weekend, highlighting his pre-game locker ritual of reading the newspaper.

Thompson received a five-year, $190 million max contract from the Golden State Warriors, the team that drafted him in 2011. He will be recovering from surgery to repair a torn ACL suffered in Game 6 of the NBA Finals against the Raptors.

Thompson has averaged 19.5 points on 45.9 percent shooting for his career. He is a career 41.9 percent 3-point shooter and has been especially clutch in the playoffs for the Dubs. Zion Williamson is changing things up in his return from his high-profile shoe blowout last month.

Williamson will be lacing up the Nike Kyrie 4 to start the ACC Tournament against Syracuse. Duke shared a photo on Twitter Thursday that shows Williamson in his new shoes.

Williamson previously wore the Nike PG 2.5 PE, which is the Paul George shoe. He was wearing that model when his shoe tore apart in the first minute of Duke’s game against North Carolina on Feb. 20. Williamson missed the remainder of the regular season and is returning to action in the conference tournament. Skechers is looking to capitalize on Nike’s high-profile equipment malfunction.

The ads are appearing in newspapers like USA Today and The New York Times, as well as Instagram.

i usually wouldn’t implore you to buy the paper for an ad, but you’ll never see shade like [squints] skechers is throwing at nike on page 3 of tomorrow’s nyt sports section again pic.twitter.com/wu9tQGacrf

As soon as Williamson had the shoe blowout, competitors pounced, though Puma deleted their tweet. Skechers decided to go all-in with an ad campaign that seems well-timed.

One of the worst public relations nightmares in Nike’s history occurred during Wednesday night’s game between Duke and North Carolina, and the sports apparel juggernaut is working hard to remedy the situation.

Just over 30 seconds into the game, freshman superstar Zion Williamson was forced to exit with a knee injury after his shoe literally fell apart. Williamson is the best player in the country and is expected to be the No. 1 overall pick in the NBA Draft, so the equipment malfunction could not have happened in a worse situation.

After UNC’s 88-72 win over the Blue Devils, Nike issued a statement about the broken shoe. A spokesperson wished Williamson a speedy recovery and said the manufacturer is working to identify the cause of the “isolated incident.”

Got this statement from a #Nike spokesman:

“We are obviously concerned and want to wish Zion a speedy recovery. The quality and performance of our products are of utmost importance. While this is an isolated occurrence, we are working to identify the issue.”

Isolated or not, the situation is a horrible look for Nike. Williamson is fortunate to have only suffered a knee sprain, though it is unclear how much time he will miss. The freshman has already been urged by some former NBA players to sit out to protect himself from injury, but no one envisioned his footwear being the issue.

As you might expect, Nike was ruthlessly mocked by the competition over the debacle.

In the first minute of the high-profile Duke-North Carolina game, Blue Devils star Zion Williamson exited with an injury after his shoe broke. Williamson was wearing the Nike PG 2.5 PE, and the shoe literally fell apart, resulting in a knee injury.

This is the biggest stage in college basketball and the biggest star in the sport, and to have the equipment fall apart and cause an injury could not have been a worse turn of events for the Swoosh. Instantly, people pounced.

Come on over to puma

Puma joined in as well before later deleting their tweet.

Wouldn’t have happened in the pumas

Others on social media instantly knew what the injury and shoe failure meant for Nike and its competitors.

Adidas, Under Armour and Reebok after Zion fell out of his Nikespic.twitter.com/255WWmjsze

Nike stock may take a hit on the market tomorrow after Zion blowout!! #UNCvsDuke

We’re not about to say Nike’s stock price is going to fall on Thursday, but this really couldn’t be worse for them.

Williamson was soon ruled out for the rest of the game due to his knee, raising questions about his future at Duke, and whether he might actually follow Scottie Pippen’s advice.

During Wednesday’s game between the Boston Celtics and Toronto Raptors, Jayson Tatum wore Nike’s new Adapt BB shoes, which can be loosened or tightened by manual touch or by using the Nike Adapt app on a smartphone.

Prior to the game, Celtics head coach Brad Stevens joked that he hopes the shoes make Tatum “superfast.”

Brad Stevens on Jayson Tatum: "He has a motorized shoe? I hope it makes him superfast."

Tatum was among the group of athletes to put the shoes through rigorous tests at Nike’s world headquarters. During Boston’s 117-108 victory, Tatum scored 16 points on 6-of-16 shooting to go along with 10 rebounds. It had to be the shoes.

Report: Kanye West’s first Adidas basketball shoe would not be approved by NBA Kanye West is pretty excited about his first Adidas Yeezy basketball shoe, but the sneaker would not be approved by the NBA as presently styled, according to a report.

West shared a sample pair of his Adidas Yeezy basketball shoes on Instagram. The photo was taken mostly in the dark, showcasing a reflective part of the shoe:

The reflective piece is apparently the reason the shoe would not be approved for wear by players during NBA games.

ESPN’s Nick DePaula reported on Monday that the shoe’s reflective heel panel is problematic because the league would deem it “potentially distracting for both in-arena spectators and television viewers.”

DePaula notes that Carmelo Anthony had a similar issue in the past and had to make a change to his shoe in order to wear it in games.

The league office has not yet received the Yeezy basketball shoe to review for approval. DePaula says they likely would approve if the reflective area were changed. 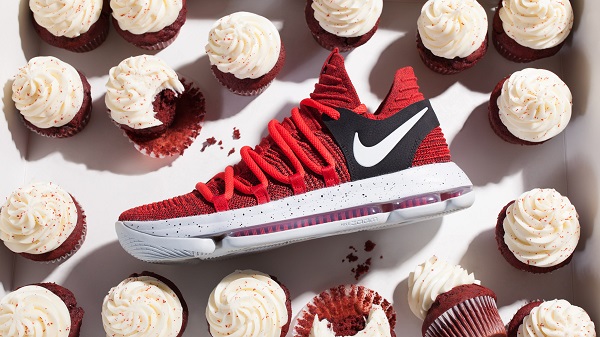 Nike has unveiled a new version of the Kevin Durant 10 shoes that seems to be a response to his haters.

On Friday, the “Red Velvet” version of the KDX shoe will go on sale on Nike’s website.

Here is Nike’s description of the shoe:

“With a style of play as smooth as velvet, KD is known for having the most fluid game in the game today. Effortlessly making defenders look helpless, always ready to cook his next victim. He dominates the game with unrivaled versatility, forever motivated by the sweet taste of victory. At the end of the day, winning is all that matters and anything else is just icing on the cake. The KDX ‘Red Velvet’ celebrates the smoothest player in the game and his undying quest for the sweet taste of victory.”

When Durant announced he was leaving the Thunder for the Warriors, Russell Westbrook took a shot at him with a cupcake photo. The Warriors later defended Durant by wearing cupcakes on gear after beating the Thunder.

Then after winning his first championship in June, Durant wore a cupcake hat. It’s obvious that this is his continued response to those who criticized him.