Monday was not a good night for the Houston Rockets on social media or at the NBA Awards show.

The saltiness continued with PJ Tucker taking a shot Rudy Gobert after he won Defensive Player of the Year. After Gobert won the award, Tucker posted a note on his Instagram Story saying “Really … if you cry enough” and included some face palm emojis.

That seems to be a reference to Gobert crying after being snubbed for the All-Star Game, which is something Warriors players took shots at him for. It seems other NBA players haven’t forgotten and are still making jokes at his expense. 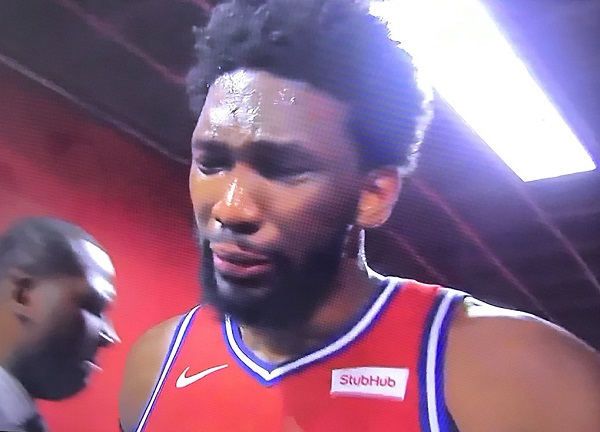 Joel Embiid showed some serious emotion after the Philadelphia 76ers lost a heartbreaking Game 7 to the Toronto Raptors on Sunday, and you can count Rudy Gobert among those who respected it.

Embiid was shown crying on his way into the locker room after Kawhi Leonard’s buzzer-beater sent the Raptors to the Western Conference Finals. One fan suggested on Twitter that Gobert should troll Embiid over it when he faces him, and the Utah Jazz big man said “only losers” would have a problem with a grown man crying after a loss.

Only losers think that crying is a sign of weakness… only shows how much of a competitor and winner you are! https://t.co/WqnFxNqduA

Gobert’s opinion in this situation is noteworthy because he and Embiid have a history with one another. If you remember, Embiid took a shot at Gobert earlier this season over Gobert winning Defensive Player of the Year. That’s probably why a fan asked him if he plans to troll Embiid, but you have to give him credit for taking the high road.

Rudy Gobert thinks Jazz were not officiated fairly against Rockets

Rudy Gobert noticed a stark difference in the way the Golden State Warriors were officiated against the Houston Rockets compared to the way the Utah Jazz were during their first-round series.

Following the Warriors win over the Rockets in Game 1 of the Western Conference semifinals, a big talking point was the way the game was officiated. There appeared to be several fouls that could have been called on Warriors that were not made by the officials.

Among those who thought the non-calls were going in the favor of the Warriors was Jazz star Rudy Gobert, who took to Twitter to point out things were not the same when the Jazz played the Rockets in the first round of this year’s playoffs.

My guys were not allowed to contest shots like that last week…or maybe i’m crazy and it’s just camera angles https://t.co/RvqYdCWzuC

Gobert’s teammate Donovan Mitchell implied Gobert can probably expect a fine from the NBA and suggested where Gobert could send the money.

Chris Paul and Mike D’Antoni both received technical fouls as a result of arguing non-calls during Sunday’s game. Paul was later ejected after picking up a second technical foul.

Game 2 of the Warriors-Rockets series is Tuesday evening. Between now and then, the officiating during Sunday’s game will garner much of the headlines. If the Rockets continue to not get generous calls from the officials, they could be in trouble for the remainder of the series.

Rudy Gobert hits back at Warriors for mocking him

Rudy Gobert wasn’t about to let the Golden State Warriors mock him without so much as a response.

Gobert talked on Friday about his All-Star snub, which cost him $1 million. The Utah Jazz center cried at the end of an interview after discussing the snub. A few Warriors players — Draymond Green and Andre Iguodala mocked him over the interview.

Later on Friday, Gobert had a response for Draymond.

Sick burn by Gobert. Of course, for those unfamiliar, Gobert was referring to this incident when he brought up Snapchat for Draymond.

No player in the NBA is more upset over not being selected to the All-Star Game than Rudy Gobert, and to say the Golden State Warriors have no sympathy for the big man would be an understatement.

Gobert was overcome with emotion while speaking about his All-Star Game snub with reporters on Friday, and he got so upset that he teared up and needed to end the interview.

Rudy grew increasingly emotional speaking with the media about his All-Star snub. Said his mom called him crying. Said he wrote and deleted several messages on social media. Finally, he grew too emotional to speak, and walked off, wiping away tears. pic.twitter.com/UkFX2nUrt8

The reigning NBA Defensive Player of the Year is not alone in thinking he was overlooked for the All-Star Game, but Warriors veterans Draymond Green and Andre Iguodala clearly felt he overreacted. Green, who was also not named an All-Star, said he supposes he should cry now, too.

I guess I should cry too… no Charlotte?

He gone cry in the car?

One thing that should be kept in mind is that Gobert lost out on a potential $1 million bonus by not making the All-Star team.

Gobert is averaging 15.0 points, 12.8 rebounds and 2.2 blocks per game. His 65 percent field goal percentage leads the league, and he believes his All-Star snub is evidence that the NBA does not value defensive ability enough. Jazz coach Quin Snyder and some of Gobert’s Jazz teammates have already expressed their disappointment in Gobert’s omission.

The NBA All-Star reserves were announced on Thursday, and Rudy Gobert was among the most prominent snubs from the Western Conference. His coach and teammates are not happy about that.

For a game that preaches defense wins championships, @rudygobert27 deserves to be an All-Star. There’s no one like him in the league. Whilst being super efficient on offense! #robbed

Ricky Rubio questioned the omission and said it was an indication that defense is overlooked.

… Rudy is not an AllStar?? I guess defense and winning means nothing

Along with Gobert, you could make a good All-Star case for the Clippers’ Tobias Harris. Karl-Anthony Towns and LaMarcus Aldridge are probably the players those two could replace.

New York Knicks point guard Frank Ntilikina pulled off one of his most surprising plays of the year when he dunked on Rudy Gobert last weekend, and the reigning Defensive Player of the Year thought it was quite rude.

The play came in the first half of the Knicks’ blowout loss to the Utah Jazz, when Ntilikina blew by his man with a nice crossover and then exploded to the basket. Gobert came over to help but was unable to do anything about it.

Ntilikina and Gobert are both from France, and the Jazz big man was seen saying something in French to Ntilikina after the play. After practice on Thursday, a reporter asked Ntilikina what the exchange was about.

“It was pretty funny because I ate at his house the day before,” Ntilikina said, per Marc Berman of the New York Post. “So he says, ‘I feed you and that’s how you treat me?’ That was funny.”

Ntilikina did not end up making another basket and finished 1-for-7 shooting on the night, so he said his dunk was a nice play but was little consolation during a 129-97 loss. Gobert’s reaction was pretty entertaining, though getting dunked on by a point guard is not going to help him defend himself against Joel Embiid’s recent criticism.

Joel Embiid is having an outstanding season with the Philadelphia 76ers, and the reigning Defensive Player of the Year could not even slow him down in Thursday night’s 114-97 win over the Utah Jazz. If you didn’t happen to notice that, Embiid would be more than happy to call attention to it.

Embiid, who went up against Jazz center Rudy Gobert for much of the night, had 23 points, 15 rebounds, six assists and five blocked shots. When asked after the game about his matchup against Gobert, Embiid threw some shade.

Joel Embiid (23 points, 15 rebounds, 6 assists, 5 blocks) on facing Jazz big man Rudy Gobert: "Oh, I love playing against guys like him. Defensive Player of the Year, I guess." — He made air quotes when he mentioned the award Gobert won. — "I should have gotten that title."

Embiid cont." "But I love playing against him. He's a great guy, great defender. I have a lot of respect for him. He makes me better every time I play against him. The future matchups are going to be exciting, and I can't wait."

Gobert and Embiid are two of the best defensive players in the game, with the former averaging 2.1 blocks per game and the latter 1.9. Embiid is also averaging 26.5 points and 13.3 rebounds per game this year, so he has been a tough cover for anyone. While Gobert is known for his defense, he was simply Embiid’s latest victim.

In addition to being one of the best big men in the NBA, Embiid is also one of the most prolific trash talkers. It’s no surprise he wasn’t ready to sing Gobert’s praises after dropping 23 in a blowout win. 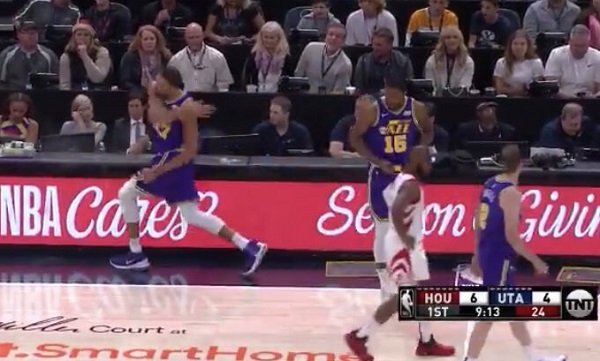 Rudy Gobert wasn’t much help for his Utah Jazz teammates in their win over the Houston Rockets Thursday night, as the big man was ejected just three minutes into the game following an outburst. That does not, however, mean his work was done.

After he was tossed for smacking a drink off the scorer’s table in protest of an offensive foul call, Gobert decided to hit the weight room. We know this because he shared a hilarious photo of himself on his Instagram story — one in which he was shirtless with the game on in the background.

You know you got ejected early when you’ve worked up a sweat lifting weights and there are still more than five minutes remaining in the first half.

Gobert picked up his first foul just one second into the game, so you can understand why he was worked up. That said, he was already fined earlier in the week for criticizing the officials following Sunday’s game against the Miami Heat. His wallet’s going to be even lighter going forward.