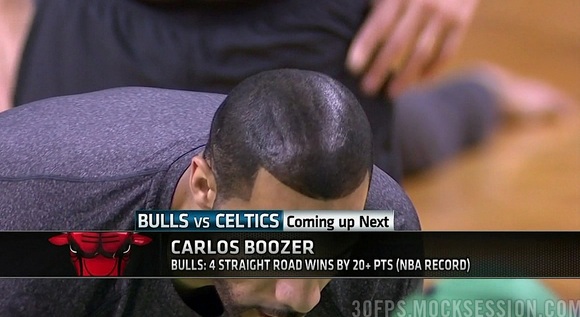 It has been more than three years since Carlos Boozer took the court rocking one of the most embarrassing hairstyles you will ever see, and the former Chicago Bulls star has finally decided to open up about the disaster.

Simply put, Boozer made a huge mistake trying to hide the fact that he was going bald. In an entertaining interview with “Highly Questionable” on Tuesday, Boozer explained how the top of his head came to look like your grandfather’s Cadillac after a pristine wax job.

“Truth be told, I’ve started losing my hair a little bit,” he said. “They came out with this — it’s like a hair dye for men called the Bigen. I had one guy that was like, ‘Yo, have you ever thought about growing your hair out?’ I said I was thinking about it until I saw some of these little bald spots on my head.

“He was telling me if I grow my hair out a little bit he can cover it up a little and make it look like I have a regular haircut. So I tried it, and he just made me look like shoe polish up there, man. This is like five years later and I’m still hearing about it.”

Boozer said he tried to shampoo his hair about seven times and had no luck getting the product out. Listening to him talk about the horrible advice he received was hilarious, and you can watch it below at the 3:10 mark:

Carlos Boozer tells tales of from his NBA career and goes into hilarious detail about the time he "dyed" his hair.

Boozer said plenty of other guys use Bigen, but he didn’t want to mention any names. While LeBron James claims he isn’t one of them, we know one former NFL star who definitely used it before the Super Bowl in 2013.

Smart decision to go back to the shaved head, Booze.