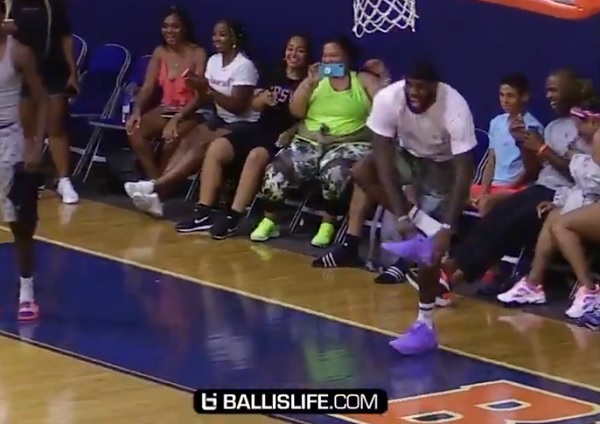 James was in Las Vegas watching Bronny’s traveling team compete in the 14U Big Time Vegas tournament, which they won. LeBron got hyped and flexed after Bronny dunked in a game. He also ran onto the court to celebrate an alley-oop and lost his shoe:

James’ celebration after the alley-oop was deemed “bizarre childlike behavior” by a Barstool Sports personality. Tatum, who has played two seasons for the Boston Celtics, defended James.

With so many fathers not supporting there kids we get upset because he is genuinely happy for his son! Lol that’s crazy I can’t wait till my son get older and I get to support him with whatever he wants to do! https://t.co/pUCZOlZreD

Dior Johnson, who is on Bronny’s team and is a top prospect for the 2022 class, defended LeBron as well.

This is Crazy to see … you guys take what this man does off the court for granted ….. sounds like hate … My Dad has never been to ONE of my basketball Games … In fact I haven’t even seen my father in 4 Years lol ….. Don’t let this go over you’re head !!! https://t.co/LFknGFQ3rS

The defenses from Tatum and Johnson of James are nice, but they delineate opposite ends of extremes.

This isn’t a matter of father who runs onto the court when he shouldn’t and also partakes in pregame layup lines being better than father not supporting his son at all. Being supportive is much better than a parent not being there, but that doesn’t mean LeBron’s behavior didn’t actually cross literal lines and cause a stoppage in play. As much as he’s hyped about his son and the teammates — and as nice as that is to pump up the players and give them confidence — James can still accomplish all that without running onto the court. Going on to the is not allowed for other parents, could be a safety risk, and should incur a technical foul. Participating in pregame layup lines also takes some of the spotlight away from his son at his son’s event.

There is middle ground here. LeBron’s support of his son and the team is great, but can’t he celebrate without running onto the court? He probably would admit he can keep his celebrations to the stands and probably should. Drake is a special VIP fan but everybody recognized he crossed the line in the playoffs. LeBron is doing the same sort of thing.