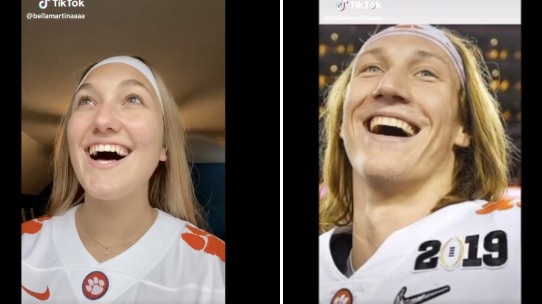 The Trevor Lawrence lookalike girl who went viral for her TikTok video attended Saturday’s Clemson-Wake Forest game in a No. 16 jersey.

Bella Martina, a 16-year-old from Georgia, went viral this month after posting a video of herself mimicking various poses from the quarterback. Their resemblance is uncanny.

“She does look like me,” Lawrence said of the video, via The Athletic. “I’ve seen a lot of those. It’s crazy. That one girl actually does look a lot like me so it’s kind of crazy. But it’s funny.”

Martina attended the game Saturday and met Lawrence before the game.

She was later shown by ABC/ESPN in the stands with her Lawrence jersey on.

Martina says she is not a huge Clemson or Lawrence fan, but after some high school classmates said she looked like the quarterback, she solicited other opinions, and everyone agreed. That led her to make the video, which quickly went viral.

It’s impossible to deny — she does look like Lawrence.