Jim Leyland was ejected after going pretty nuts on the umpires during a bench-clearing brawl between the Detroit Tigers and Chicago White Sox on Thursday at Comerica Park.

The issues between the teams began in the bottom of the fifth when Sox pitcher Chris Sale threw at Prince Fielder following a Miguel Cabrera home run that made it 3-1 Detroit. Unless Sale is a really good actor, his body language indicated that he missed his target on the pitch. The next inning, rookie catcher Josh Phegly hit a grand slam to give the White Sox a 5-3 lead. Tigers reliever Luke Putkonen responded by throwing behind Chicago shortstop Alexei Ramirez two batters later. 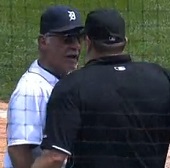 An angered Ramirez took a few steps towards the mound and pointed at Putkonen for throwing behind him, leading to the benches clearing. Leyland came out of the dugout, raged on the umpires, and was ejected. After initially going to the clubhouse, he came back out to complain that he and Putkonen were tossed while no White Sox were — namely Ramirez.

Alexei ended up getting a single in his at-bat. I’ve never seen Leyland get so heated. Did he run out of cigarettes this morning or something?