The 16 most interesting numbers of the Sweet 16 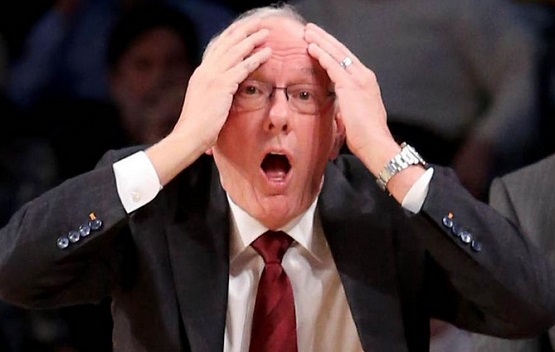 This year’s Sweet 16 is jam-packed with fascinating intersectional match-ups. Coaching legends, prestigious programs and elite players litter the landscape. Here are 16 interesting numbers to keep in mind as you watch the eight regional semifinal contests this week.

The Sweet 16 has been the kiss of death for Syracuse head coach Jim Boeheim. The 2006 College Basketball Hall of Fame inductee has bowed out in this round 11 times, while only advancing on five occasions.

Four players remaining in the field have experience playing in the national championship game for their current school. Duke’s Matt Jones, Grayson Allen, Marshall Plumlee and the injured Amile Jefferson all logged minutes for the Blue Devils against Wisconsin in last season’s championship game. But did you know that Gonzaga’s Kyle Wiltjer played against Kansas in the 2012 final as a member of the Kentucky Wildcats? What’s even more astonishing is that five of Wiltjer’s UK teammates from that game have already logged two or more years in the NBA.

The Wisconsin State Journal reported that Greg Gard is scheduled to make $275,000 this year as the Badgers’ head coach. According to the Sporting News, Coach K makes 21.98-times that. Regardless of salary, both coaches find themselves as one possession underdogs in the Sweet 16.

Indiana and North Carolina have reached the Sweet 16 a combined 54 times. To give that some perspective, Oklahoma and Texas A&M, who also play in this round, combine for just 14 appearances.

Buddy Hield’s explosive second half against VCU not only saved the Sooners but also put the presumptive National Player of the Year on pace to break Glen Rice’s 27-year-old NCAA Tournament scoring record. Hield is already more than a third of the way to Rice’s total of 184 points scored during Michigan’s title run back in 1989.

According to the number wizards at FiveThirtyEight.com, the A&M comeback against Northern Iowa defied the odds. In fact, the 12-point deficit that the Aggies erased, and their subsequent overtime victory, had a probability of 1-in-3000.

The Oregon Ducks were the first team to win the NCAA Tournament back in 1939, defeating Ohio State by the score of 46-33. Known as the Webfoots at the time, Oregon’s size helped them earn another nickname, the “Tall Firs.” UO was a defensive force, but it was John H. Dick’s 15 points that helped them dispatch Ohio State in the tournament final. Dick would later enlist in the Navy during World War II, eventually reaching the rank of rear admiral.

Duke has the longest distance to travel for their regional semifinal contest. Their 2,204.9 mile journey is onerous, but the selection committee didn’t do any programs a favor this year. The closest distance for a team is Iowa State’s 309 mile trek to Chicago.

Kansas is favored by six points against Maryland on Thursday night, marking the tenth straight NCAA Tournament game that KU has been the favorite. The last time the Jayhawks were an underdog was in 2012 when they met Kentucky in the national championship game. The Wildcats were favored by seven points and won the game 67-59.

Sports Illustrated’s Andrew Sharp has both Diamond Stone and Melo Trimble going in the first round of his most recent NBA mock draft. The last time two Maryland players were selected in the first round of the same draft was 2002. That year also marked the one and only time Maryland won the national championship.

Mark Few is batting a thousand when it comes to the NCAA Tournament. He’s been the man in charge for 17 years in Spokane and he’s taken the Zags to the Big Dance 17 consecutive years. This year also marks the sixth time he’s led the Bulldogs to the Sweet 16.

Jim Larranaga was a head coach for 12 years before leading a team to the NCAA Tournament. Once he punched his first ticket to the Big Dance, however, he’s proven to be one of the best coaches in the country. Since 1999, Larranaga is 9-6 on the sport’s biggest stage, including his magical run to the Final Four as George Mason’s head coach in 2006.

Even if Villanova is able to reel off four more wins, a national title as a two-seed will pale in comparison to what the program accomplished in 1985. Needing a perfect performance to beat the Patrick Ewing-led Hoyas, the Wildcats shot a preposterous 78.6 percent from the field in the title game. That’s far-and-away the best shooting percentage from any team in the NCAA championship game. The next best performance is a full 11.2 percent lower (Ohio State, ‘60).

Thirteen former players and assistants of Mike Krzyzewski have gone on to become head coaches at the Division I level. Of those coaches, Notre Dame’s Mike Brey has the most wins in the NCAA Tournament (11). Brey has also enjoyed the longest tenure as a head coach of any of the members of Coach K’s coaching tree.

Virginia’s Ralph Sampson appeared on the cover of Sports Illustrated six times while in Charlottesville. That’s one less than the amount of NCAA Tournament victories he accrued in his four years in college.