Austin Rivers admits he is cocky, but the good kind of cocky 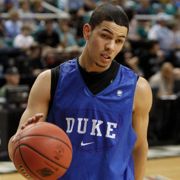 Austin Rivers is one of those players people either love or hate. For every scout who believes he is a dynamic talent and can be an impact player immediately at the NBA level there are others who think he is overrated and has a questionable attitude. Many have criticized Rivers for being too cocky, which is a common trait for young players who have dominated their sport to possess. Austin himself agrees with those who say he is cocky, but according to him that is not a bad thing.

In a sense, he’s right. Michael Jordan, Kobe Bryant, and Larry Bird are three of the cockiest athletes to ever live. They are also three of the best. Almost all Hall of Famers have a certain confidence about them, but the way you present it is the important thing. As Rivers matures, he’ll either learn how to harness his cocky attitude or end up with people viewing him the way they view LeBron James.