Tony Mandarich Explains How to Pass an NCAA Urine Test 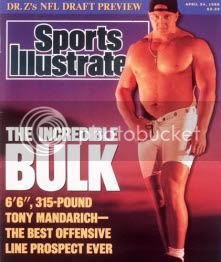 So Tony Mandarich has come clean on his use of steroids back when he played for Michigan State. The use of the roids allowed him to beef up, become super-human, and get drafted second overall by the Green Bay Packers in ’89. Mandarich has written a tell-all book to explain his addiction to painkillers and alcohol. He also sat down with Sports Illustrated 20 years later to apologize for lying to them about his use of roids in a cover story. Probably the best part of the article is the blow-by-blow for how Mandarich passed his urine tests. Check it out, from Mandarich’s point of view:

“For the Rose Bowl in 1988, we were tested two weeks before on campus, and then we heard there was going to be a second test [in Pasadena]. I’d already gotten back on Anadrol-50, a steroids which makes you significantly stronger within a day or two, and now I’m freaking. I’m in this large 24-hour store, about midnight, brainstorming, thinking how am I going to beat this test?”

“In the pet area I see this rubber doggy squeaker toy. I get that, then I go to another area and get a small hose, and in the medical area I get some flesh-colored tape. I’m like the Unabomber getting supplies. Back home I rip the squeakers out of the toy, tape the hose into one end and experiment by filling the thing with water. At the Rose Bowl I taped the toy to my back, ran the hose between my butt cheeks, taped the end to my penis, and covered the hose tip with bubble gum. I had gotten some clean urine from somebody else. The tester stood behind me, couldn’t see anything, and when I removed the gum everything worked fine.”

At the Gator Bowl the following year Mandarich customized a squeezable glue bottle to replace the doggy toy. “A quarter twist of the cap, no leak, no moving parts–it was almost too easy.”

Well, I guess you might have to be inclined to give Mandarich some credit for his creativity in the way he passed those tests. That’s pretty slick. That doesn’t change what a cheat and fraud he was. He says he stopped using roids in the NFL because he was worried about failing tests, so I guess the dog tricks wouldn’t work at that level. I can’t even imagine what methods are available to mask tests these days. Filtering some fresh piss into the penis catheter style or something? I don’t even want to know …