Dusty Baker was on the losing side of one of the most exciting postseason games in recent memory, and the man wasn’t exactly magnanimous after the defeat.

Following his Washington Nationals’ 4-3 Game 5 loss to the Dodgers, Baker didn’t strictly applaud his opponents and the gutsy maneuvering of opposing manager Dave Roberts, but rather he pointed out the downside to Roberts’ moves.

Dusty Baker: "I’d be interested to see — they won the war — but the effects of Jansen and Kershaw when they get to Chicago."

Sour grapes, Dusty? We know he’s never been shy to speak his mind, but that remark is still a surprise.

Roberts’ pitching staff may be overworked at this point, but at least his team is moving on to the NLCS rather than going home, which is sort of the objective, not making sure your staff is well rested and set up for games they’re not going to play.

Roberts is being lauded for his creativity with managing the Dodgers in the decisive game. He pulled his starter in the third; went to his setup man that inning; used a 20-year-old in relief; put his closer in for the 7th; and then used his ace, Clayton Kershaw, on short rest in the ninth. Baker says that managing in that manner, which is going against the proverbial “book,” is not something he’ll be doing any time soon.

I asked Baker if the Dodgers' use of Jansen tonight could turn into a trend: "It’s not a trend that I’d like to be a part of anytime."

Maybe it’s Baker’s failure to adapt that’s preventing the Nats from going further. The team still has yet to win a playoff series.

Dusty Baker on struggling Danny Espinosa: ‘Who else do I have?’

Washington Nationals manager Dusty Baker has some problems with his lineup, and his public response isn’t exactly encouraging.

Shortstop Danny Espinosa has hit under .200 since the All-Star break, and he struck out three times in three at-bats during Friday’s NLDS opening loss, leaving six on base. When asked about replacing him, Baker didn’t exactly inspire confidence.

This statement probably won’t make Espinosa feel better. The Nationals do have options, though. There’s Stephen Drew, and they could also move fleet-footed Trea Turner back to short and put Michael A. Taylor in center, though maybe Dusty just wants Turner to beef up a bit. Neither option is great, but both are probably superior to Espinosa at this point.

The Washington Nationals appear to have a star in the making with infielder Trea Turner, and manager Dusty Baker says the 23-year-old should get even better when he beefs up a bit.

Turner, who is generously listed at 6-foot-1 and 185 pounds, is hitting .340 since he was called up from Double-A in June. He has 11 multi-hit games in the month of August and 10 hits over his last three games. At one point, he had a stretch where he had eight hits in eight plate appearances. Baker likes what he sees, even if the kid has a boney butt.

“He’s wiry strong. That ball he hit down the line, that’s a big man’s swing right there,” Baker said. “He’s stronger than he appears, and he’s gonna get stronger yet when he gets his man muscles or man bones. The other day I tapped him on the butt and I was like, ‘Man, you’re hard as a rock.’ He goes, ‘I should be. It’s all bones.'”

That’s exactly the assessment we’d expect from the guy who once made this entertaining remark about his best player.

Even without his “man muscles,” Turner is helping the Nationals build upon their lead in the NL East. If he can keep this up, Washington will be even more dangerous in the postseason.

Max Scherzer had funny exchange with Dusty Baker on mound 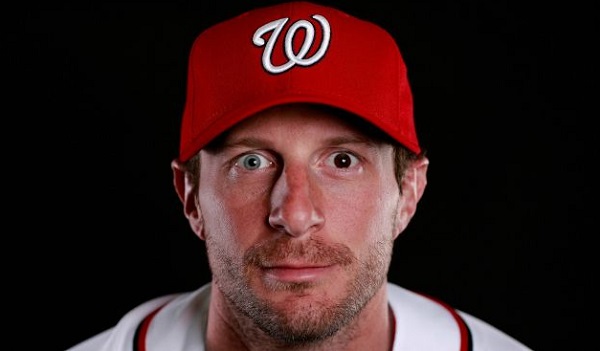 Max Scherzer had a funny exchange with manager Dusty Baker during a mound visit in Saturday’s game.

Scherzer threw yet another gem as the Washington Nationals beat the New York Mets 6-1. The right-hander had a great start to the bottom of the seventh as he struck out the first two batters. But Scherzer walked the next batter, prompting a visit from his manager.

The conversation turned to one about the pitcher’s eyes:

Dusty, to Scherzer on the mound in the 7th: "Which eye you looking out of?" Scherzer: "The (freaking) brown one." Dusty left him in.

Scherzer, asked why he said the brown one: "It's the pitching eye."

Scherzer has a condition called heterochromia iridum, which means the irises of his eyes are different colors. The right one is blue and his left one is brown. That right one also apparently is his pitching eye, which sounds an awful lot like something he learned from “Bull Durham.”

Scherzer’s sense of humor over the matter shouldn’t come as a surprise, as the guy tends to be funny with the media.

Dusty Baker: I might have to ‘spank’ Bryce Harper sometimes

Dusty Baker is an old-school manager, and he apparently isn’t afraid to resort to some old-school parenting styles with his players if he has to.

On Tuesday, Baker was asked about Bryce Harper’s outburst during and after Monday night’s game, in which Harper was ejected for arguing a called third strike on a teammate in the 9th inning and later returned to the field to hurl an F-bomb at the umpire. How is Dusty going to handle it? He’s not afraid to warm some butts.

Dusty said he doesn't mind Harper's emotion: "I happen to like the young man…Will I have to spank him sometimes? Maybe."

Harper felt umpire Brian Knight was singling him out when several Nationals players were complaining, so he decided to scream a curse word at Knight while celebrating Washington’s walk-off win. You can see the video here.

Harper expressed no remorse after the game, and it would not be surprising if Baker sided with him in this situation. But let this be a warning to Harper and all other Nationals players — if you step out of line, Old Man Dusty isn’t afraid to bend you over his knee. Dusty Baker had some funny comments about Stephen Strasburg pitching through an illness on Thursday.

Strasburg was scratched from his scheduled start on Wednesday with the flu. He was able to make the start Thursday against the Atlanta Braves, but it wasn’t easy, apparently.

Nationals manager Dusty Baker touched on how tough it was for Strasburg to suit up for the game.

Dusty said it was touch-and-go whether Strasburg would start today. "He was on guts. That was a gutsy performance."

Dusty on Strasburg: "He looked like he was close to needing mouth-to-mouth. I wasn't gonna give it to him."

Strasburg went 7.2 innings allowing four hits, two runs and two walks with seven strikeouts. He got the win to improve to 2-0 with a 1.98 ERA this season. And he did it all without even requiring mouth-to-mouth! Not too bad for a guy who was said to be so sick prior to the game.

Dusty Baker has entered his first spring training with the Washington Nationals, and the 66-year-old manager has some work to do with regard to learning the names of his players.

According to Chelsea Janes of The Washington Post, Baker has already called Bryce Harper by the wrong name on more than one occasion.

By the way, Dusty Baker keeps accidentally referring to Bryce Harper as 'Royce.' Twice so far.

Harper had a breakout season in 2015 when he hit .330 with 42 home runs and 99 RBI. The 23-year-old has the potential to be the best player in baseball if he can stay healthy, so Baker will probably learn his name in a hurry.

As many of you know, Baker is known for getting himself into trouble with his mouth. Calling a star player by the wrong name pales in comparison with the comments he made about speedy baserunning earlier this winter. I guess part of being an old-school manager is not paying attention to the young guys’ names.