Andrew Luck had been mulling retirement for two weeks, lost love of game 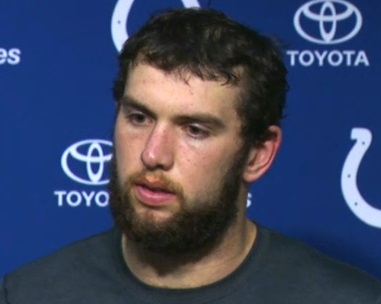 Andrew Luck has made the absolutely shocking decision to retire from the NFL in the middle of his prime, and it’s apparently a choice he’s been thinking about for a few weeks.

Luck has barely participated in the Indianapolis Colts’ offseason workouts or training camp due to a mysterious leg injury. He was trying to get ready for Week 1 despite the calf/ankle injury. However, news came out on Saturday night via ESPN’s Adam Schefter that Luck was retiring.

Filed to ESPN: Andrew Luck has informed the Colts he is retiring from the NFL, per source. There will be a press conference Sunday to make it official, but Luck is mentally worn down, and now checking out.

NFL Media’s Ian Rapoport says Luck had been considering retirement for a few weeks and that his love for the game waned.

The #Colts have known that QB Andrew Luck was seriously mulling retiring for at least two weeks. He’s married, he plans to travel the world, and once the love for the game waned, it sounds like he wanted to step away. So, he did.

Luck has been dealing with injuries the last few years that have affected his mental state. On top of the current leg injury he’s been dealing with, Luck missed all of the 2017 season recovering from shoulder surgery.

He said in August that recovering from his current injury was frustrating.

“At times I do worry about it. It can be frustrating,” Luck said earlier this month.

Luck suffered a lacerated kidney and a partially torn abdominal muscle in 2015, which is the same year he tore the labrum in his shoulder. He played through a torn cartilage in his ribs in 2015. He played through the torn labrum in 2016 but missed all of 2017 while recovering from surgery. Last year he admitted he suffered another shoulder injury while snowboarding in late 2016. He also suffered a concussion in 2016.

“I’ve seen more doctors than I can count on two hands over the past two or three years,” Luck said last year.

The 29-year-old was the No. 1 pick in the 2012 NFL Draft. He made four Pro Bowls, threw for 39 touchdowns last season, and was viewed as an MVP contender in the middle of his prime. Instead, he walks away having made $97 million during his career.