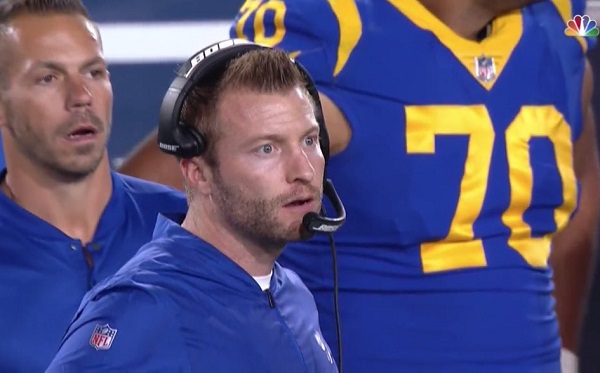 Few expected Super Bowl LIII to be a total defensive struggle, but that’s what we got in a 13-3 New England Patriots victory. New England’s latest title comes at the expense of the Los Angeles Rams, whose high-powered offense failed to even score a touchdown in the biggest game of their season.

The New England defense played great, but the Rams’ offense didn’t ever look like they were going on a run. Todd Gurley and the run game disappeared. Jared Goff was pressured and seemed confused a lot and never really found a groove or open receivers. He was slightly late on a key throw to Brandin Cooks that should have been a touchdown, and was let down by Cooks on a drop in the fourth quarter on what may have been his best throw of the day. It just didn’t work out for anyone on the Rams’ offense in the big game, which was rather shocking considering how good they were for much of the season.

The Rams were bad on offense all day and struggled to get anything going, but one key moment in the fourth quarter may end up being the key moment of the game. Rams receiver Brandin Cooks had a touchdown catch if he could just haul in the throw, but it slipped through his hands. On the very next play, Jared Goff threw a lame duck interception that set the Patriots up to run out the clock. Cooks will be seeing that play in his nightmares. It wasn’t an easy one, but it was certainly catchable.

The Rams got a lot of pressure on Tom Brady early in the game, and Donald was in the middle of it. Ultimately, though, the Patriots’ offensive line began to take over and didn’t really let Brady take a lot of pressure in the second half. From that standpoint, Donald simply didn’t have the impact that he had hoped to have. He had five tackles, and did get one hit on Brady, but didn’t get a sack and wasn’t really a wrecking ball in the backfield. It’s a bit ruthless to say so when the Patriots were held to just 13 points, but from a standpoint of pushing New England backwards or forcing turnovers, it just didn’t happen.

We will probably get more on Gurley’s status in the days to come, but Sunday did nothing to convince anyone that the Rams’ running back wasn’t playing hurt. After a lot of talk about a bigger role in the Super Bowl, Gurley was anonymous early and didn’t get a lot better as the game went on. Gurley got just 10 carries for 35 yards and lost a yard on his only reception. He didn’t ever appear fully healthy, and it wasn’t a performance he’ll want to remember.

Brady is a deserved winner of another Super Bowl, but this certainly won’t go down to his finest performance in a championship. A lot of his throws were off, and he threw a very bad interception in the first quarter. To Brady’s credit, he didn’t commit any further turnovers, though he had a scary moment with a sack and fumble. Brady didn’t throw for a touchdown and his one great pass of the day was to Rob Gronkowski on the ultimately winning touchdown drive, but he let the run game carry him and found Julian Edelman when he needed to. It still wasn’t a signature performance.