Yasiel Puig flies out to right, pimps it like a home run (GIF)

Yasiel Puig may be the new version of Manny Being Manny. 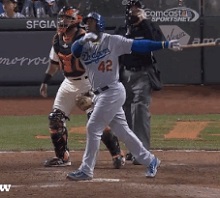 This dude gave us yet another unforgettable moment on Tuesday night.

The Los Angeles Dodgers and San Francisco Giants were in extra innings at AT&T Park and Puig was batting with one out, Hanley Ramirez on second, and the game tied at 2. Puig connected with a Yusmeiro Petit pitch and thought he had blasted a tie-breaking 2-run home run to right, so he began celebrating appropriately.

Unfortunately, it takes one heck of a shot to get it out to right field at AT&T Park, and Puig’s ball was caught for the second out, though Ramirez tagged up and went to third. Andre Ethier made the final out of the inning and the Giants went on to win the game in the bottom of the inning.

But at least in his mind, Puig had the game-winning home run. Or maybe he thought he hit it well and then didn’t run it out once he realized it would be an out.

If you liked that, you’ll love this GIF from the NLCS last year when Puig pimped a triple.