CNN host Chris Cuomo went viral on Monday night after a video of him in a heated exchange with another man over the word “Fredo” circulated online.

The video, said to have been sent to “THAT’S THE POINT with Brandon,” shows Cuomo threatening a man who called him “Fredo.” Cuomo took the name “Fredo” to be an insult and compared it to a slur for Italians similar to the N-word — a point which many disputed. Instead, they believe “Fredo” is a reference to “The Godfather” and a way of mocking someone for being the dumb son/brother. Chris’ father Mario is the former New York governor.

The video’s description on YouTube says a “fan of news went to ask Chris Cuomo for a photo, mind you the man who asked him DID NOT know his real name and knows of him only through The RUSH LIMBUAGH SHOW and on that show Rush repeatedly calls him “FREDO” so the man legitimately thought his name was FREDO.”

CNN is standing behind the 49-year-old host.

“Chris Cuomo defended himself when he was verbally attacked with the use of an ethnic slur in an orchestrated setup. We completely support him.”

Cuomo may be wrong about the nature of the insulting term, but there is no doubt being called “Fredo” is not meant to be a compliment. An Ohio dad went “Field of Dreams” and built an absolutely gorgeous baseball field in his backyard for his son.

Jason Kidd, 36, was playing baseball with his now 5-year-old son, who asked whether they could have a baseball field in their backyard. Kidd told WKYC that he dismissed the idea at first, but after reconsidering, the request didn’t seem so unreasonable.

“About two years ago my son and I were playing with his plastic T-ball set and he asked if we could build a baseball field in the backyard. I kind of blew him off.”

“I kind of started thinking about it. Then I started measuring to see if we have room, and now I have a baseball field.”

Kidd decided to get to work on building the field in the backyard of his Brookfield home. He removed some trees and a hill in his yard. Two years and about $30,000 later, he ended up with a beautiful field that includes infield clay, a raised pitching mound, painted foul lines, and more.

Kidd, who is a Cleveland Indians fan, named the field the “Re-Jake,” which is a take on Jacobs Field, the previous name for the Indians’ home park. He views the field as a way he will be able to share the love of baseball with his son. And he didn’t even have to plow through any corn fields to build it! OJ Simpson joins Twitter, says ‘I killed her’ after seeming to get hacked 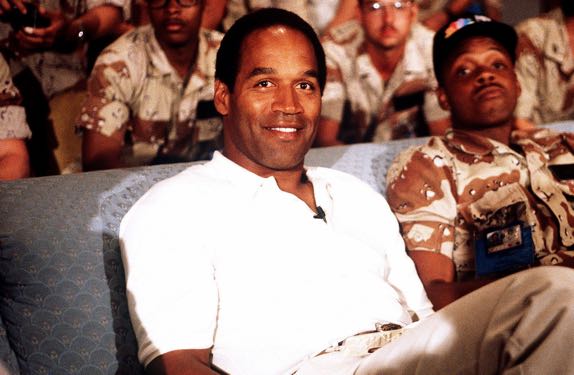 OJ Simpson officially joined Twitter on Friday night and has already made headlines for some of his messages.

Simpson’s first tweet contained a video message he recorded for his followers. In his video, he said he had some “getting even to do.”

His second tweet is what caught everyone’s attention. He tweeted “I killed her.”

His other tweets that followed included him using the N-word and asking where the b—– at. It looked as if he had been hacked.

Simpson seemingly launching his Twitter account comes the week of the 25th anniversary of the murder of his ex-wife, Nicole Brown Simpson, and Ronald Goldman.

The Juice has been out of prison since his release on Oct. 1, 2017 due to parole. He was imprisoned for nine years due to felony kidnapping and armed robbery. He was acquitted in 1994 for the murders of Brown Simpson and Goldman in a highly-publicized court case

Justin Bieber wants to fight Tom Cruise in the octagon and is hoping the UFC will make arrangements.

Bieber tweeted on Sunday night about his desire to face Cruise and asked who was willing to put on the fight. He tagged UFC president Dana White in the tweet.

I wanna challenge Tom Cruise to fight in the octagon. Tom if you dont take this fight your scared and you will never live it down. Who is willing to put on the fight? @danawhite ?

The consensus seems to be that Cruise would destroy Bieber in an MMA match. But you never really know what will happen until the bell rings. It would be a battle between the Church of Scientology and the Hillsong Church.

If they’re able to make this fight happen, we’d love to see it. Darren Rovell was crushed on Twitter Sunday for criticizing those who put up a billboard celebrating an accomplishment by LSU’s women’s gymnastics team.

LSU’s women’s gymnastics finished second in the Four on the Floor national championship event Saturday, behind Oklahoma and ahead of UCLA. This was the third time LSU finished second in the NCAA the last four years — a tribute to the excellence of the senior class, even if they fell short of their ultimate goal of winning it all.

A billboard even went up celebrating the team’s runner-up finish:

No, you can’t put up a billboard for coming in second. https://t.co/wxDPqBNzNr

Rovell’s tweet was so poorly received that he ended up getting “ratio’d” on Twitter, meaning he was bombarded with negative feedback. He even heard it from members of LSU’s team, like Sarah Finnegan and Ashlyn Kirby.

I’m not even going to entertain you, Dan, Derek, David, Dicky, whatever your name is.

Sounds like someone was runner up in their Easter egg hunt. There’s always next year, Dave. https://t.co/QfVqsvkIv2

Others pointed out how this was no different than celebrating a Final Four or College World Series appearance by hanging a banner, but Rovell disagreed. Then someone threw this little factoid back at him:

The guy saying second-best-in-the-nation LSU doesn’t deserve a billboard? He placed 21,463rd in a marathon and got the shoes he ran it in plated in gold. https://t.co/QFiZ0gJDRw

Rovell is so completely wrong here it’s not even funny.

The LSU team may have not won the national championship, but to say they’re not deserving of recognition, celebration and accolades is shortsighted. They won the SEC meet and had two individual national champion trophies. They finished ahead of a UCLA team that featured two Olympic gold medalists. That’s not something worthy of being proud? I guess anyone who has won a silver or bronze medal at the Olympics should just throw them away.

“Success is peace of mind, which is a direct result of self-satisfaction in knowing you made the effort to do your best to become the best that you are capable of becoming.”

I didn’t see anything in there about success being defined by winning a championship and nothing less. I’m sure Rovell won’t understand that, though he’s probably used to being smacked down for his poor opinions. A Utah Jazz fan went viral on Saturday night for her wild hairstyle after being shown on TV by ESPN.

Late in the fourth quarter of Game 3 of the Jazz’s first-round playoff series with the Houston Rockets, ESPN showed the woman on TV. Her hair, which was puffed out nearly a foot high, was magnificent:

This is the most amazing thing I've seen since aquanet got pulled off the market pic.twitter.com/JPmbufLeOy

Folks on the internet were instantly captivated by her and her hair:

This Utah Jazz fan looks like Khabib Nurmagomedov with his hat pic.twitter.com/1I7rU0mkou

I thought that ladies hair was that thing they do to people on tv where they goof on your melon with a funhouse mirror. That’s her goin’ out helmet? I stopped caring about the game and need specifics on that as a look.

The public demands answers. We need to know more about this ‘do.