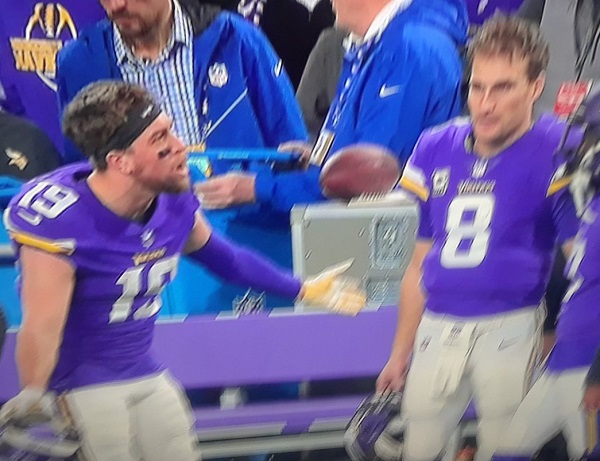 Kirk Cousins and Adam Thielen shared a moment of frustration on the sideline during Sunday’s game against the Chicago Bears.

The Minnesota Vikings settled for a field goal for their first points of the game in the final minute before the half. Cousins missed a receiver out of the backfield on 2nd-and-5. The on third down, he released the ball early before Thielen had made his cut for a route towards the corner of the end zone. The ball fell incomplete by several yards, and Minnesota ended up kicking on fourth down.

As they went to the sideline, Thielen appeared to show frustration with Cousins, possibly for throwing the ball too early in the route.

Frustrations sarting to set in for the #Vikings. Kirk Cousins says “I don’t have 10 seconds." – Adam Thielen doesn't care. pic.twitter.com/lCtbIkXzQQ

Cousins could be seen saying in response that he doesn’t have 10 seconds to sit back and wait. The two then seemed to talk about a route modification where Thielen would get where Cousins needs him to be much quicker.

Cousins and Thielen trying to get their timing down on the sideline pic.twitter.com/jh7jCwm15O

Such is life when you’re facing the pressure from the Bears’ vaunted defense.

Cousins was only 9/14 for 44 yards, while Thielen had just 1 catch for 9 yards in the first half. The performance only supported Cam Jordan’s criticism of the QB.