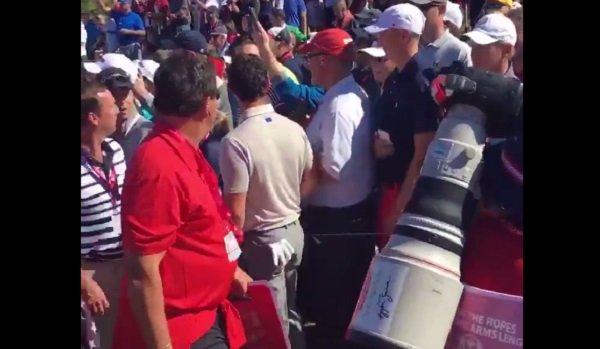 The 2016 Ryder Cup is taking place on U.S. soil, which means the European team is facing a rowdy crowd and lots of hecklers. In fact, one was so rude with his comments on Saturday that Rory McIlroy had the fan removed.

During Day 2 play at Hazeltine National Golf Club in Minnesota, McIlroy was heckled by a fan with a vulgar comment. The fan also made a remark about McIlroy’s ex-fiancee, Caroline Wozniacki. Beware of language.

Heckler just told Rory to "suck a dick" and him coming up short was why Wozniacki "left his ass"#RyderCup pic.twitter.com/uBU72xPoGt

McIlroy stopped in his tracks and looked over to where the fan was in the gallery. He then alerted a course marshal, who removed the fan from the area.

My dad holding Rory back from fighting a heckler in the crowd! Does he win Most Valuable Marshall at the #RyderCup pic.twitter.com/CbhFerOnlS

Rory McIlroy confronts fan, says to remove him. No physical contact. Marshal tells me fan to be removed immediately. pic.twitter.com/namR3844jX

This was just more of the same type of treatment the European players have been receiving from the fans, although this crossed the line. During Thursday’s practice round, one heckler even got called out on the course to putt in this awesome video.

As if that weren’t enough, another heckler made reference to that exchange a day later:

And there was more heckling McIlroy faced about Wozniacki:

Crowd serenading Rory with "Sweet Caroline bomp, bomp, bomp …" he turned around and screamed the rest of the verse to them. Lit.

Despite the heckling, McIlroy and Thomas Pieters won their match against Brooks Koepka and Dustin Johnson 3 and 1 Saturday.