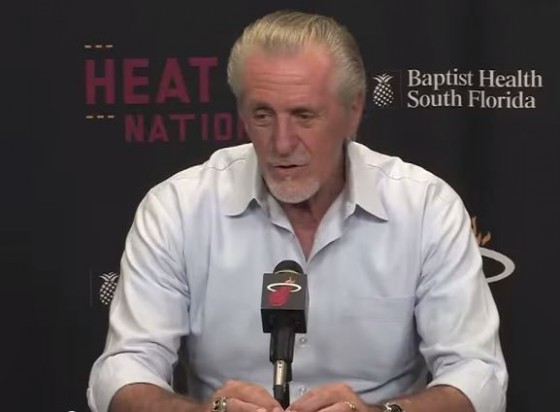 Having gone 11-5 thus far in the second half of the NBA season, the Miami Heat can afford to be mum about the status of All-Star big man Chris Bosh and have been. But is team president Pat Riley beginning to drop hints about the possibility of a Bosh return?

Addressing the media on Sunday at the team’s annual Miami Heat Family Festival event, Riley offered that the team is “open-minded” about the potential of Bosh returning to action, per Ira Winderman of the South Florida Sun Sentinel.

Riley says Heat are "open minded" when it comes to a possible Chris Bosh return.

Bosh, 31, has been sidelined since mid-February when a calf strain that kept him out of the All-Star Game turned out to be a much more serious problem: a possible recurrence of the blood clotting issue he faced last season.

Since then, the Heat have decline to provide an official update on Bosh’s status, with the only clues we’ve gotten about his health being longtime teammate Dwyane Wade downplaying concerns and Bosh himself tweeting that he is free of deep vein thrombosis and hopes to return this season. Still, Bosh, who was reportedly back on blood thinners after this latest scare, has been said to be under pressure to sit out the remainder of the season, and it’s understandable why the team would err on the side of extreme caution.

The Heat have not only survived, but thrived in Bosh’s absence, however. Having Luol Deng slide up to Bosh’s spot as the starting 4 has caused matchup nightmare for opponents and really opened up the floor for point guard Goran Dragic to operate. The recently-acquired Joe Johnson has been a godsend for the team’s spacing, while rad rookies Justise Winslow and Josh Richardson have flourished in increased playing time. That’s not even to mention head coach Erik Spoelstra’s brilliant decision to unleash shot-blocking, rim-running menace Hassan Whiteside off the bench as a chemical weapon and that Wade has managed to play and be effective in 63 games and counting this season.

With the return of young backup guard Tyler Johnson looming, adding Bosh to that mix makes it look like the Heat have a very real chance of winning the East this year, especially after a huge 122-101 win over the Cavs on Saturday. Every indication we have gotten with regard to Bosh, including these most recent comments by Riley, has been positive and that his health situation is nowhere near as serious as it was last year, providing cause for optimism. Only time will tell if there’s anything to that optimism and if Bosh can contribute to a Heat team on the brink of surprise title contention this year.