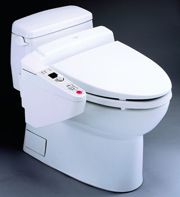 If anyone can afford to have a toilet that is more than just a toilet in their house, it’s Tom Brady and Gisele Bundchen.  According to Wes Welker, they have exactly that in their new home in California.  One of the fully-expected but completely off-topic questions that was presented to Welker on Thursday morning had to do with Brady’s new digs.  Tom’s favorite receiver took that opportunity to talk about the two-time Super Bowl MVP’s new throne.

Of course Tom Brady has a bidet — he’s Tom Brady.  The Herald has reason to believe the toilet Welker is describing is the Toto Washlet Performance Toilet. Some of its features include a heated seat, an automatically closing lid, a blow dryer for your can, and perfume scents to take the smell away.  You can even get ones that come with a built-in MP3 player.

People like us bring our iPod into the bathroom with us if we think we’re going to be a while.  Multimillionaire quarterbacks consolidate.