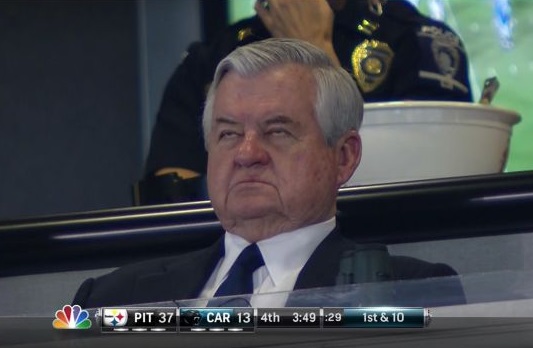 A new report Sunday detailed many disturbing allegations made against Carolina Panthers owner Jerry Richardson, including multiple examples of sexual harassment and an instance in which Richardson used an alleged racial slur against a team scout.

Jon Wertheim and Viv Bernstein of Sports Illustrated investigated the allegations into Richardson and uncovered several particularly disgusting details. Chief among them was the fact that Richardson allegedly took great interest in female employees’ bodies, and several who spoke to SI recounted how Richardson asked them if he could shave their legs.

Multiple women also recalled that Richardson brought female employees to his office to ask them for foot massages, and frequently gave women back rubs that either lasted too long or went too low down the spine.

The Panthers also held Jeans Day on Fridays, during which Richardson would allegedly ask female employees to turn around so he could admire their backsides and ask invasive questions about the effort required to get into the jeans. He allegedly went as far as to ask female employees to “show me how you wiggle to get those jeans up.” He also resorted to what women called the “seatbelt maneuver,” in which Richardson invited female employees out for lunch and insisted on bucking them into the car himself, enabling his hands to brush across the woman’s breasts as he did so.

Richardson’s alleged harassment wasn’t all sexual. The Panthers owner had a history of racial discrimination in his restaurant businesses, and asked Cam Newton after he was drafted No. 1 overall in 2011 if he went “crazy after the draft and go out and get any tattoos or piercings.” Multiple sources also alleged that Richardson used a racial slur against a former Panthers scout, which apparently resulted in a financial settlement. It was one of at least four reported settlements given to former Carolina employees due to inappropriate workplace behavior.

The Panthers have hired an outside investigator to look into the claims of workplace misconduct — and, given that they announced it abruptly on Friday, had warning that this story was coming.