Jim Harbaugh on Jim Schwartz Handshake: I Shook His Hand too Hard 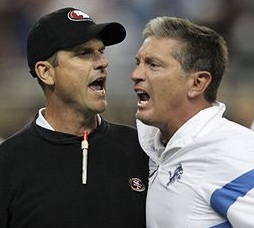 Jim Harbaugh and Jim Schwartz provided the most entertaining moment of the NFL weekend with their contentious postgame handshake. Harbaugh was enthusiastic after his team’s road win at Detroit. He gave Schwartz a forceful shake complemented by a hand on the back. Schwartz didn’t like the hand in the back, so he followed Harbaugh towards the locker room tunnel to confront him. Harbaugh can be seen telling Schwartz “Get out of my face.”

Harbaugh said after the game that he was excited about his team’s win. “I was really revved up and I shook his hand too hard,” Harbaugh explained. “It was a strong slap/grab handshake kind of like what I have been doing with [49ers linebacker Blake] Costanzo and other guys.”

“It was too hard of a handshake,” he admitted.

Harbaugh should have waited until after the handshake to let loose, and Schwartz should have shrugged off the hard shake. But let’s be real: do you think these guys are consciously thinking about how they should behave, or were they just reacting to the outcome of the game? If you think Harbaugh’s celebration was the result of a snub from Schwartz in March, you’re reading way too much into this. Some coaches get excited after wins and get carried away. Some coaches will respond if they feel disrespected.

And let’s be real: isn’t football a lot more fun when coaches get into arguments over postgame handshakes? As long as it’s not a coach cussing out an amateur player, I’m fine with it.