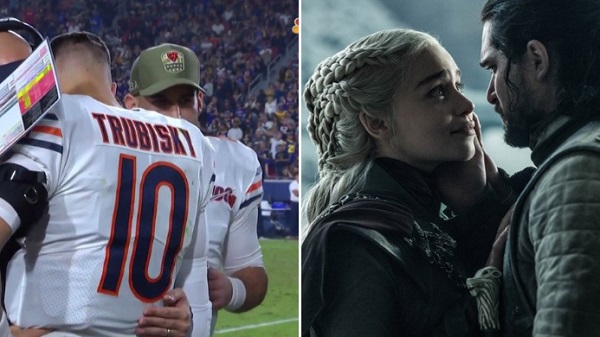 An image shown by NBC on Sunday night of Matt Nagy having a conversation with Mitch Trubisky, seemingly about replacing the quarterback for Chase Daniel late in the Chicago Bears’ 17-7 loss to the Los Angeles Rams, has gone viral and is now a meme about betrayal.

NBC was unclear about the reason for Trubisky being replaced by Daniel and seemed to think the quarterback had been benched. They showed the conversation the two shared, which was portrayed as one where the coach could have been talking to the quarterback about sitting him down. The image drew comparisons to other moments of betrayal from famous movie or TV show scenes.

Here were a few other memes:

Trubisky admitted after the game that his hip began bothering him in the second quarter. Nagy said that he pressed Trubisky, who finally admitted the hip was bothering him, which is why the change was made.

You’ll forgive us if we don’t believe the hip injury was the primary reason for the change; Nagy was looking to replace Trubisky and pressed for a reason to do it.