NFL Network draft analyst Mike Mayock thinks that the Cleveland Browns will take Sam Darnold with the No. 1 overall pick in the draft.

Mayock held a conference call on Friday with other media members to answer questions about the upcoming draft. He was asked what he thinks the Browns will do with their first pick.

“If you’re asking me for my gut feel, just based on all the film work I’ve done and talking to people around the league, et cetera, my gut tells me that at one, Cleveland will take Sam Darnold,” Mayock said, via the Akron Beacon Journal.

Mayock is a fan of Josh Allen, ranking him as his second quarterback and saying he has a high ceiling. But he thinks the Browns will go with the USC product over him. That differs from what another NFL Network draft analyst has said.

As far as quarterbacks go, Mayock ranks Darnold first, then Allen, then Josh Rosen, Baker Mayfield and Lamar Jackson. You can see our quarterback rankings here. Taysom Hill’s days as a hybrid quarterback appear to essentially be over, and he had an interesting reaction to that reality. Hill is transitioning to the tight end position full time in 2022 after several experimental years as a quarterback… 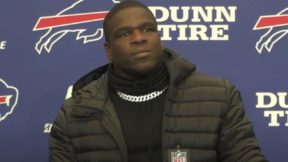