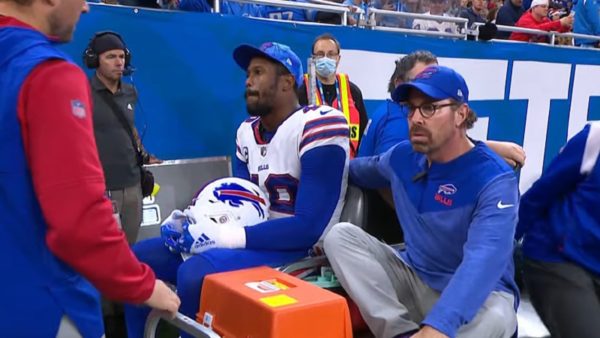 Von Miller was optimistic that he would not miss much time after he suffered a knee injury during the Buffalo Bills’ win over the Detroit Lions on Thanksgiving Day, but the star pass-rusher received some unfortunate news from doctors this week.

Bills head coach Sean McDermott announced on Wednesday that Miller will miss the remainder of the season. The 33-year-old underwent exploratory surgery on Tuesday, during which doctors determined that his ACL was torn.

Von Miller had said he hoped to be back after missing just one game. The team put him on IR to ease him back. Then, exploratory surgery yesterday revealed the ACL was, in fact, torn. Now, out for the season. A crushing loss. https://t.co/GPGpVmkZ5H

Miller said a little over a week ago that he was aiming to return for Buffalo’s Week 14 game against the New York Jets. The Bills then decided to play things safe by placing him on injured reserve, meaning Miller had to sit out a minimum of four games. With the latest development, he will not be able to play until next season.

Losing Miller is a massive blow to Buffalo’s defense. The eight-time Pro Bowl linebacker had 8 sacks through 12 games and was having one of his best seasons in years. The 9-3 Bills will have to find other ways to generate pressure on opposing quarterbacks down the stretch and in the playoffs.