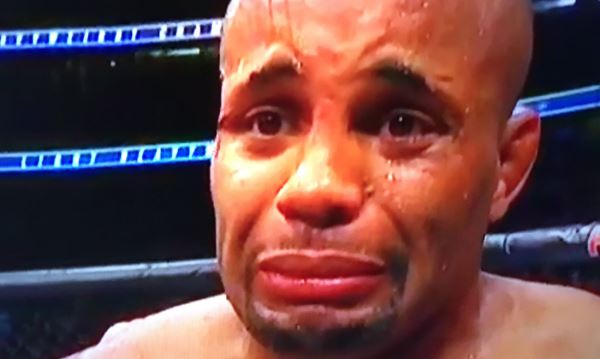 Crying Jordan may have to make room for Crying Daniel Cormier.

Jon Jones defeated Cormier by way of a devastating third-round KO at UFC 214 on Saturday night to become the new light heavyweight champion.

After the bout and during his post-fight interview, a visibly shaken and disappointed Cormier was seen crying in the Octagon.

Daniel cormier crying like a baby someone make a meme out this vid pic.twitter.com/g9PGyHBbj1

Needless to say, the Internet has never had any chill before, and it certainly wasn’t about to start now. Here are some of the best Crying Cormier memes that were spawned as a result:

Daniel Cormier: "All I remember after the kick was people yelling worldstar!" pic.twitter.com/5kTla6FXK4

When your girl calls your belly cute… #UFC214 pic.twitter.com/vrA5JtFpeb

When your parents are grilling you but you've run out of excuses… #UFC214 pic.twitter.com/Fli8O308t8

When your team blows 28-3 lead in the super bowl pic.twitter.com/iuOMExWSgH

When she say " I love you too you're like my brother" pic.twitter.com/1Is97u6bDk

When you wake up craving @ChickfilA on a Sunday… #UFC214 @dc_mma pic.twitter.com/vWnACutmzb

When you throw your report card away but your mom tells you to go find it #ufc214 #Daniel Cormier jon jones pic.twitter.com/2zRPAYZsom

"It's a ten minute wait for spicy" pic.twitter.com/uaLFK1lFqo

When you send her a good morning text and she doesn't reply pic.twitter.com/wHakCqAgYY

When you order a McFlurry and find out the machine is broken…. #UFC214 @dc_mma pic.twitter.com/5zrfaytyBQ

When you wake up in the morning and see that missed phone call and wyd at 3:46am #UFC214 #Jones pic.twitter.com/jIPp6IerIh

When it's payday but all of your check goes to bills #UFC214 pic.twitter.com/69ihXIudI0

When someone ate your leftovers in the Refrigerator #UFC214 pic.twitter.com/YLUOVpqnFc

Given how much hype and trash talk led up to this rematch, it was inevitable that the loser would be on the receiving end of a thorough social media humiliation, and it looks like that’s exactly what happened to Cormier here.