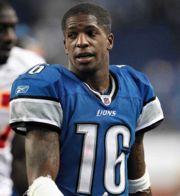 Titus Young returned to practice on Wednesday for the first time since he was sent home for selfish behavior and later deactivated for the Detroit Lions’ Thanksgiving Day game against the Houston Texans. Disciplinary action is nothing new for Young, but the latest childish act he reportedly pulled takes his immaturity to an entirely new level.

According to Dave Birkett of the Detroit Free Press, one of the reasons Young was benched for the Thanksgiving Day game was his attempt to sabotage the Lions’ passing attack against the Green Bay Packers the prior week. As we showed you a couple weeks ago, two Detroit coaches got into a heated discussion on the sideline during their team’s loss to Green Bay. Young was reportedly the source of their frustration, and now we know why.

Apparently Titus was unhappy with the lack of balls being thrown his way against the Packers, so he decided to intentionally line up in the wrong spot on the field “multiple times” before mouthing off to Lions receiver coach Shawn Jefferson and being benched for the final series of the game.

Had a player without a history of punching teammates and headbutting opponents pulled this type of stunt, we might be surprised. Young has repeatedly acted like a child since the Lions drafted him last year, and they have had to treat him accordingly. Jefferson and Calvin Johnson indicated on Wednesday that they expect rookie receiver Ryan Broyles and newly-acquired Mike Thomas to continue to see increased work going forward, so it sounds like the Lions may be close to officially losing their patience with their talented but troubled 2011 second-round pick.