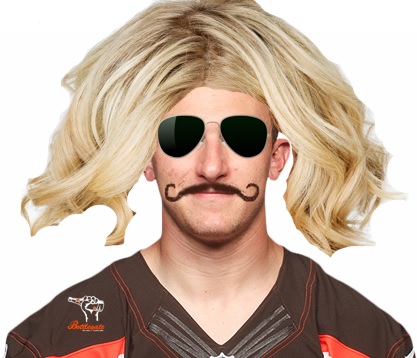 Johnny Manziel may have gone out of his way to deny being in Las Vegas over the weekend, but more and more evidence seems to point to him hitting Sin City. The latest report says the Cleveland Browns quarterback wore a disguise and used an alias while partying there.

ESPN Las Vegas radio host Mitch Moss reported the news on Monday night. He says Manziel wore a blond wig, fake mustache, glasses and hoodie, and that he introduced himself as “Billy.” Seriously.

Our sources tell us Manziel was at a popular night club on the strip Saturday night. The QB entered wearing a blonde wig, a fake mustache, glasses, and a hoodie.

Manziel introduced himself as “Billy.” He was there into the 3am hour and when it came time to pay the bill, he asked to have it comped because he didn’t bring cash and also didn’t want to put it on his card.

Moss also says Manziel ate at the club’s restaurant before going to the club, and yes, he had his disguise on during dinner.

Originally, there was conflict about Manziel’s whereabouts, but more and more evidence suggests he was in Las Vegas. Let’s go over the timeline of events.

On Saturday night, there were reports from Twitter users and a USA Today editor saying Manziel was in Vegas, playing blackjack and even tipping well. Then we learned that Manziel no-showed for the team’s season finale on Sunday against the Pittsburgh Steelers. Then on Monday we found out Manziel’s girlfriend Colleen Crowley was in Las Vegas for the weekend.

Despite Manziel’s insistence that he was in Ohio — he posted on Instagram with his location on — that he was spending his Saturday night at home, everything seems to point to him lying. And why should we believe him anyway? He’s already lied to the Browns once about his whereabouts when he was trying to cover up his partying. Why would this be any different?

See all the best photoshops of Billy Manziel here.