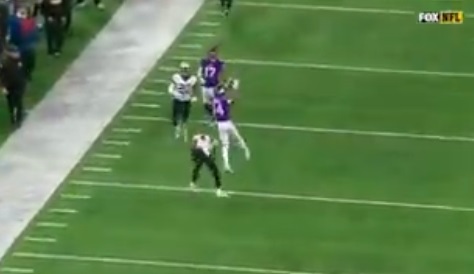 Marcus Williams is going to have a hard time living down his epic blunder on Sunday.

With 10 seconds left in their NFC divisional playoff game, the Minnesota Vikings heaved a pass downfield to Stefon Diggs. Diggs made the catch and should have been brought down to end the game, but Williams somehow completely whiffed on the tackle:

HEAD UP. WRAP UP. WHAT ARE YOU DOING MARCUS WILLIAMS?!?!?!? #Saints #Vikings pic.twitter.com/APh7gwmkTE

It seemed like Williams tried so hard to avoid a PI call that he shied away from contact altogether. He also ran into a teammate behind him.

If Williams had made the tackle, Diggs would have been brought down with a few seconds left. The Vikings did not have any timeouts left, so time would have expired and made the New Orleans Saints the winners. Instead, the Vikings won the game and will advance to face the Eagles in Philly in the NFC championship game.

Unfortunately for Williams, the pathetic tackling effort is nothing new.