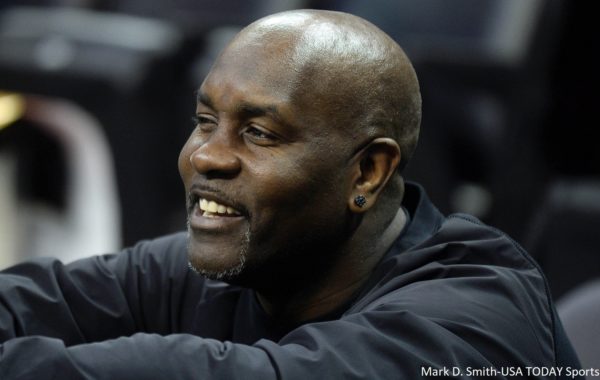 The Seattle Seahawks have yet to make Russell Wilson available for trade, but the Chicago Bears may have already made a decision regarding whether to target him.

According to Brad Biggs of the Chicago Tribune, multiple sources say the Bears have “prioritized” making an attempt to trade for Wilson this offseason. The Bears have already been named as one of the four teams Wilson would approve a trade to, but the quarterback still isn’t trying to force his way out of Seattle.

If Wilson does try to push for a move, the Bears might find themselves as the only realistic trade destination based on the quarterback’s current list. The New Orleans Saints’ cap situation would make a trade difficult, assuming Drew Brees retires. The Raiders and Cowboys have quarterbacks in Derek Carr and Dak Prescott, though one or both could change their stance if someone of Wilson’s caliber is readily available.

The Bears were viewed as a surprising option when they appeared on Wilson’s list, but the quarterback has his reasons. The interest certainly appears mutual, but there’s still a long way to go before a trade can be viewed as realistic.

Mike Conley has made his first career All-Star Game Utah Jazz players were pushing for Mike Conley to make the All-Star Game, and their wish has finally come true.

Official announcement from the NBA that Mike Conley replaces Devin Booker in both the All-Star Game and the 3-Point Contest: pic.twitter.com/iSZk14DH0O

Conley spoke two weeks ago about how badly he wanted to make his first All-Star Game.

The veteran guard has been in the NBA for 14 seasons and is highly respected, but he has never quite been good enough to get an All-Star nod. Now he finally has gotten it, thanks to injuries and a combination of Utah’s success and his quality play.

Booker replaced Anthony Davis in the game, and now Conley is replacing Booker. Utah has the best record in the NBA at 27-9. Conley is averaging 16.1 points on a career-best 42.2 percent shooting on threes.

Fitzmagic might finally be ending ahead of the 2021 NFL season.

According to NFL reporter John Clayton, veteran quarterback Ryan Fitzpatrick is apparently headed toward retirement. Clayton says the Denver Broncos were among teams interested in Fitzpatrick, but he appears likely to be “out of the mix” and may be set to end his playing career.

Fitzpatrick is 38, so the timing does make sense. He was still contributing in the NFL in 2020, going 4-3 as a starter for the Miami Dolphins and providing valuable guidance for Tua Tagovailoa. 2020 marked the 13th consecutive season that Fitzpatrick had started at least one regular season game for someone, a period of time that saw him suit up for seven different teams.

Fitzpatrick would clearly draw interest if he elects to return for another season. Apparently, he’s decided that he’s had enough. Les Miles’ future at Kansas is in serious question.

Miles on Friday was placed on administrative leave by Kansas. The school will be investigating the allegations Miles faced while at LSU.

Yahoo’s Pete Thamel says this is the first step towards Kansas likely firing Miles for cause. Being fired for cause would mean Kansas would be able to get out of paying Miles the remainder of money on his existing contract.

Kansas has placed Les Miles on administrative leave. KU will conduct its own investigation. This is the likely first step toward firing Miles for cause.

USA Today reported on Thursday that Miles was investigated by LSU in 2013 over accusations of improper conduct with some female students.

Miles was warned that he would lose his job if he continued to have contact with female students. The warning came after Miles was accused of inappropriately texting female students, inviting them to his condo alone, and kissing a student on one occasion.

Some other allegations centered around the qualities for looks Miles sought among women working with the football program. We have more details on the report here.

LSU’s former athletic director recommending firing Miles in 2013 and believed public opinion would be in their favor.

New information. Former #LSU athletic director Joe Alleva recommended in 2013 to fire Les Miles with cause and said the public opinion would be in LSU's favor. pic.twitter.com/x1C6TzOX6a

Miles kept his job with LSU until a 2-2 start in the 2016 season, when he was fired. Miles spent a few years away from coaching but was eventually hired by Kansas. He went 3-9 in his first season and 0-9 last season.

Johnny Manziel has message for hater about his professional golf plans

Johnny Manziel recently went public about his goal of playing professional golf. He has quite a lot of people doubting him, but he’s not concerned about that.

Manziel responded on Twitter to someone who said he was positive the former quarterback would not become a pro golfer. Manziel dismissed the doubter, saying people didn’t think he would win a Heisman Trophy either. Of course, Manziel won the award as a redshirt sophomore in the 2013 season.

Here is what Manziel said in response:

Everybody has an opinion, man. A lotta people said I’d never win a Heisman either but sometimes life has other plans for you. https://t.co/UxWM2PtmVM

Johnny Football knows that making it as a pro golfer is a longshot. However, he says he is giving himself 12 years to make it happen. That’s a lot of time for the 28-year-old to work on his game.

Even if making it is unrealistic, at least this will give Manziel something to do, which it sounds like he needs.

The Dallas Cowboys need to get a long-term deal done with quarterback Dak Prescott this offseason, and it sounds like efforts to do so are going better than they did a year ago.

According to Ian Rapoport of NFL Network, Prescott and the Cowboys have made “some progress” and are moving in a “positive direction.” Perhaps most importantly, Rapoport notes that talks are moving more smoothly than they ever did in 2020, a process which ended with Prescott playing under the franchise tag.

From NFL Now: As the franchise tag deadline looms, where do things stand with #Cowboys QB Dak Prescott (all positive as of now), #Lions WR Kenny Golladay, and #Panthers OT Taylor Moton (expected to be tagged). pic.twitter.com/jLnSzGe7rQ

Notably, Rapoport says the Cowboys will tag Prescott if they must, but hope it doesn’t come to that again.

The Cowboys know there may be consequences if they don’t get a long-term contract done with their quarterback. That’s a huge motivating factor, and it’s probably a reason why things are going better now than they did a year ago.

Mac Jones appears to be winning over NFL executives in the same way he apparently won over former Alabama offensive coordinator Steve Sarkisian.

ESPN NFL Draft analyst Todd McShay relayed a story from Sarkisian, who had originally planned to keep things simple for Jones and let him use the talent around him. Within three weeks, Sarkisian said he was installing more complex plays with his quarterback than he ever anticipated.

“Going back to … I think it was the second or third game of the year, against Missouri, all coach Sark was saying is, ‘We just need Mac Jones to stay in his lane,'” McShay told ESPN’s “Get Up!” via Garrett Stepien of 247Sports. “… The second game we did in the middle of the season, (Sarkisian) said, ‘You know, I’m starting to install more and he’s showing me more.’

“And by the third game that we did at the end of the year, Sark said to us he has installed more with Mac Jones than he had with any other college quarterback. So that’s the mental aptitude that he has.”

Jones has been widely praised for his instincts and intangibles. As McShay notes, he lacks mobility, which could be a concern in a league that increasingly values that in its quarterbacks. NFL teams don’t seem bothered by that in this case, though. Jones’ former Alabama teammates certainly weren’t.